Home » When is Canceled Debt Taxable?

When is Canceled Debt Taxable? 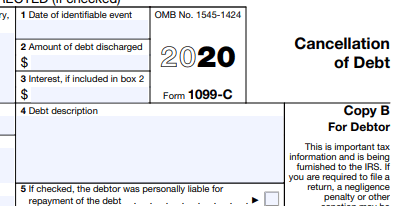 While a few debt resolution strategies are focused on restructuring debt, many involve cutting down the amount paid. Some examples include:

While the goal of each of these approaches is to eliminate some debt to help you regain control of your finances and move forward on more stable ground, there is one big difference between bankruptcy and the other options on this list. And, it’s a difference many people don’t know about until it’s too late: whether or not you’ll receive a 1099-C.

A 1099 is a tax form issued by someone who has paid money to the taxpayer in some way other than wages. You have probably received 1099s in the past, for work you may have done as an independent contractor, or for interest you earned on your bank account. The 1099-C is a special type of 1099 specifically for canceled obligations.

In other words, a form for reporting income that isn’t really income, just debt you don’t have to pay back.

That “income” gets added to the bottom line on your tax return, and you’re taxed on it just as if someone had paid you that amount of cash. Of course, the tax is only a percentage of the “income,” so you still come out ahead. Since there’s no state income tax in Nevada and no county income tax in Clark County,  the added cost for Las Vegas residents will be federal income tax. For example, if you have $10,000 in debt written off, you might pay $1,500 or $2,000 (or a bit more, depending on your other income) extra in income tax. You’ve still saved thousands of dollars.

But, that additional tax debt can wipe out an expected refund, or even mean someone expecting a refund ends up having to pay taxes. That can throw off a carefully constructed budget intended to help you rebuild after settling those debts–especially if you don’t see it coming. And, many people don’t. When you’re negotiating with a creditor, they’re very unlikely to let you know that there will be tax consequences to the deal.  When you sign on with a debt settlement company, they’re very likely to put the emphasis on cutting your debt and downplay the tax consequences–if they mention them at all.

That means many people who have debt canceled are blindsided just when they thought they were out of the financial woods.

That doesn’t happen when debt is discharged in bankruptcy.

Why is Discharged Debt Treated Differently?

This form can also be used to reduce the amount of taxable income in whole or part due to insolvency, even if you didn’t file for bankruptcy. However, the insolvency calculation takes into account all of your debts and assets at the time the debt was canceled, and taxable income is reduced only to the extent of the difference.

In the example, above, for instance, a taxpayer who negotiated a balance reduction of $10,000 and wasn’t insolvent at the time could expect to be taxed on the full $10,000. If the taxpayer’s insolvency was greater than $10,000–that is, if debts exceeded assets by more than $10,000–then none of the canceled debt would be taxable. But, if the taxpayer was insolvent to a lesser degree, then the canceled debt would be partially taxable. Calculating insolvency to attempt to exclude canceled debt from income can be complicated.

What is the Best Way to Eliminate Debt?

The tax obligation associated with certain resolutions is one factor to consider, but it’s not the only one. The best way to resolve debt depends on you, your income, the type of debt you’re carrying, the amount of your debt, what assets you own, your short and long-term goals, and other factors. At Freedom Law Firm, we’ve helped thousands of people find solutions so they could move toward a brighter financial future. We know that the more you know about your options and the possible pros and cons, the better positioned you are to make the right decision for you and your family.

That’s why we offer free consultations to people in and around Las Vegas who are struggling with debt. You can schedule yours right now by calling 702-903-1459 or filling out the contact form on this page.